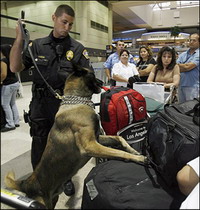 The terminal was temporarily evacuated, and the baggage claim and screening areas were slightly flooded, said airport spokesman Marshall Lowe.

Long lines formed in front of the terminal as passengers were readmitted through security checkpoints.

Airport officials could not immediately give estimates on flight delays.