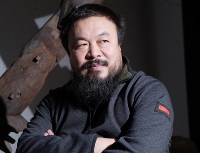 A severe storm caused the collapse of an 8-meter tall work by Chinese artist Ai Weiwei at a major contemporary art show in Germany.

"Template," an archlike structure being exhibited outdoors, collapsed in on itself "in astonishingly aesthetic fashion," said Catrin Seefranz, a spokeswoman for the Documenta show in the central city of Kassel. No one was injured.

Seefranz said Ai already had seen the collapsed work and pronounced it more beautiful than before. She said the artist, whose work deals with construction, deconstruction and transience, does not at this stage plan to restore it.

Documenta, which is held once every five years, opened last Saturday and runs for 100 days.