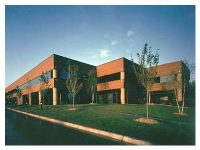 Police were investigating how a naked couple fell 50 feet from the roof of a South Carolina office building to their deaths.

The bodies were found on the road by a passing cabdriver around 5 a.m. Wednesday.

Clothing was discovered on the roof, leading authorities to suspect the man and woman, in their early 20s, may have been having sex. Their identities were not released.

"It's too early to rule out anything," Columbia police Sgt. Florence McCants said, but McCants said a preliminary investigation did not show any sign of foul play.