Fire swept through a furniture warehouse in the southern city of Charleston, claiming the lives of nine firefighters. 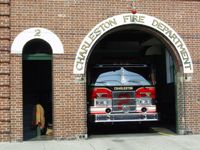 "Nine brave, heroic, courageous firefighters of the city of Charleston have perished fighting fire in a most courageous and fearless manner, carrying out their duties," Charleston Mayor Joseph P. Riley said at a morning news conference. "To all of their loved ones, our heart goes out to them."

Two employees in the building were rescued from the blaze, which broke out at about 7 p.m. Monday in the Sofa Super Store and warehouse, Riley said. One was rescued quickly, and firefighters punched a hole through a wall of the warehouse to reach the other, he said.

Firefighters, police officers and other rescue workers saluted as the firefighters' bodies were carried from the warehouse during the night.

The department has 237 firefighters in 19 companies located throughout the city of about 106,000.

The cause of the fire was under investigation, but Riley said arson was not suspected. He said the blaze apparently started in a storage area. He was unsure whether there were sprinklers in the building.

The county coroner scheduled an afternoon news conference to release the names of the dead.

Witnesses said the collapse of the roof threw debris over about two-dozen rescue workers. Onlookers were hit with flying ash.

"It was like a 30-foot (9-meter) tornado of flames," said Mark Hilton, who was struck in his eye.

Salesman Daniel Shahid told CNN the roof collapsed too quickly for anyone to escape.

"It came from nowhere," he said. "It was a standing structure and five seconds later it was on the ground."

"This is a profession that we must never take for granted," the mayor said. "There's a fire raging and they go toward it."

"All of us at Sofa Super Store are devastated and heartbroken by this tragedy. Our thoughts and prayers go out to the families and loved ones of the heroic firefighters who lost their lives," he said.

He had owned the store for about 15 years, said his son, Jeff Goldstein.

In a small plaza next to the city's main fire house, notes and flowers were left at the base of a monument to firefighters Tuesday.

"Our thoughts and prayers are with all of you and your families. We are deeply saddened and want you all to know that we value your bravery and thank you for putting your lives on the line to keep us all safe. God bless you all," read one note.

17:01
Video: Moment when rocket strikes Palace of Culture in Kharkiv region
16:54
Commander of Ukraine's 36th Marine Brigade surrenders
16:26
Russian FM Lavrov says all fears about West's plans are now confirmed
16:04
Russian Major General explains why Moscow doesn't carry out a 'hard purge' in Ukraine
15:28
Monkeypox on the rise in Europe and on the way to Russia
14:31
Russian ruble continues rising in value against all odds
13:34
Russia to build 12 military units along western borders
21:31
Twenty Ukrainian paratroopers surrender to Donetsk People's Militia
17:00
DPA: European Parliament urges the EU to impose sanctions against Schroeder
15:36
McDonald's names the buyer of the Russian part of its business
World
Expert reveals when third phase of Russian operation in Ukraine begins