A bombing on a busy street in the mainly Kurdish city of Diyarbakir early Friday injured seven people, including a noncommissioned army officer. 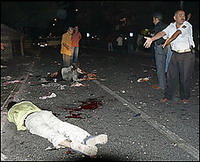 The device - a pipe bomb hidden in newspapers and attached to a bicycle - exploded near bus stops used by army vehicles to pick up military personnel, Chief Prosecutor Durdu Kavak said.

In the past, Kurdish rebels have carried out bombings in Diyarbakir in their fight for autonomy in the region, which has gone on more than two decades.

Turkish leaders are debating whether to launch a cross-border offensive into northern Iraq, from where rebels of the Kurdistan Workers' Party, or PKK, stage attacks into Turkey. The Turkish military has been carrying out several anti-rebel offensives within Turkey and has massed troops along the border with Iraq.

Turkey has been pressing the United States and Iraq to crack down on the rebels.

On Friday, Prime Minister Recep Tayyip Erdogan said he has invited Iraq's prime minister, Nouri al-Maliki, to visit Turkey sometime this month to discuss the issue, though he has not yet received a response.

"A positive outcome may come out" of the diplomatic efforts, Erdogan said in an interview on CNN-Turk television.

The United States is reluctant to engage in a conflict against the rebels in northern Iraq, one of that country's most stable areas.

The rebels have stepped up attacks on Turkish troops, and more than two dozen soldiers or pro-government village guards have been killed in several attacks since May 24. Turkish troops have killed 25 guerrillas during the same period, according to the military.

The rebels announced a unilateral cease-fire in attacks against Turkey earlier this week, insisting they would only strike in self-defense. But attacks have carried on despite the announcement.

Friday's blast shattered windows, and shredded newspaper was scattered around the street.

One of the injured, a local shop owner, was in serious condition, Kavak said.

"There was a terrifying explosion as I was walking," Servet Sengun, a high-school student, was quoted as telling the private Dogan news agency. "All of a sudden, I found myself lying on the ground."