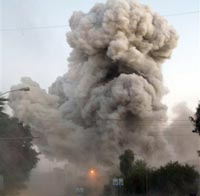 The bomb went off close to a bus stop from where military personnel are picked up, the local governor's office said.

It was not clear if any of the injured were military personnel.

There was no immediate responsibility claim, but separatist Kurdish rebels who have been fighting for autonomy in the region or more than two decades have carried out bomb attacks in the city in the past.

The rebels have stepped up attacks on Turkish troops.

The attacks came a day after the Kurdish separatist group PKK declared a "unilateral cease-fire" in attacks against Turkey. The rebel group, however, insisted on the right to defend itself.

Turkey has ignored the rebel statement.