Police used tear gas and clashed with protesters who tried to attack the annual gay rights parade in the Romanian capital. 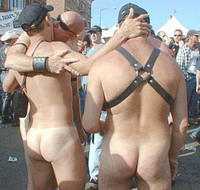 About 100 people were detained after they threw stones and fireworks at police and at about 400 participants in the gay rights march, said Christian Ciocan, a police spokesman. No injuries were reported, he said. He said police intervened with tear gas because people, including passers-by were at risk of being hit with stones.

"We regret that our opponents use violence ... Police only did their job to protect an authorized march," said Florin Buhuceanu, one of the organizers of the gay rights march. "It is our right to express our beliefs and we will not renounce in the face of violence."

On Tuesday, two men leaving a Bucharest cinema which hosts the annual "Gay Fest" festival were attacked and beaten by eight attackers. Police intervened to stop the attack and arrested several suspects.