A disgruntled employee fatally shot a co-worker at a doctor's office Friday morning, then went home and killed herself. 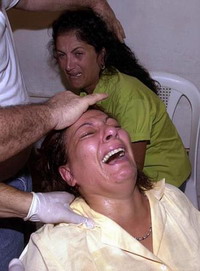 The alleged shooter, Jacquelyn Ann Ferguson, 51, of Sarasota, fled the building afterward and was found dead on the patio of her home about two hours later, officials told the Sarasota Herald-Tribune. It was not immediately clear how she died.

About 10 other employees were in the medical office at the time of the shooting, and they walked out of the building with their hands in the air, sheriff's Lt. Chuck Lesaltato said at a news conference. Lesaltato did not immediately return phone messages left by The Associated Press.

The slain woman's name was not being released until family members could be notified, Sarasota County fire spokesman Paul Dezzi said.

Sarasota is about 45 miles (72 kilometers) south of Tampa.