The Nigerian politician implicated in a corruption scandal claims he was unwittingly used by the lawmaker to perpetuate the wide known scam. 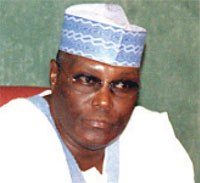 Former Vice President Atiku Abubakar said in a statement released Thursday that Lousiana Democrat William Jefferson, who is under a bribery indictment in the U.S., tried to legitimize his business ventures by linking them to Abubakar.

Abubakar said the scheme is familiar to citizens of Nigeria, the country of origin of many email scams offering to share the non-existent fortunes of famous ex-dictators with overseas investors who are later fleeced. The emails are known as "419" scams because of the section of the Nigerian legal code they violate.

Abubakar is "an innocent public official who in the discharge of his functions was exposed to a conman who continuously dropped his name before unsuspecting businessmen to swindle them," his office said in a release. Abubakar "was a victim of a 419 scam."

Abubakar, who is under investigation in Nigeria in a separate corruption case involving missing oil funds, has long denied any untoward activities stemming from the Jefferson case.

Abubakar, a long-time civil servant, placed third in April presidential elections in Nigeria, long considered one of the world's most corrupt countries.

His candidacy was nearly derailed by the separate corruption allegations, and Jefferson's indictment has made front-page headlines in this country.

On Thursday, the ethics committee of the U.S. House of Representatives voted to expand its investigation of Jefferson to include any subject in a 16-count corruption indictment handed up earlier in the week.

The indictment Monday accused Jefferson of receiving more than US$500,000 in bribes and seeking millions more in nearly a dozen separate scheme to enrich himself by using his office to broker business deals in Africa.

The charges came almost two years after investigators raided Jefferson's home in Washington and found $90,000 in cash stuffed in his freezer. According to court records, Jefferson told associates he needed cash to pay bribes to Nigeria's country's vice president.

While Abubakar is not cited by name in the case, the indictment refers to "Nigerian Official A," a high-ranking official in Nigeria's executive branch who had a spouse in Potomac, Maryland, which is outside the American capitol.

One of Abubakar's wives, Jennifer Douglas, lived in that Washington suburb. A search warrant for the Potomac home, combined with the indictment, makes clear that Abubakar is the unnamed Nigerian official _ and Abubakar says it refers to him.

Abubakar said he met with Jefferson at the behest of the Nigerian embassy in the United States _ an entreaty he couldn't refuse.

At the meeting, Abubakar said he was asked to help Jefferson's company win a communications contract that would use the terrestrial network of Nigeria's state-owned telephone company. Abubakar said he merely forwarded the business plan to the company, and received a reply that it was not feasible.

Nigeria's landline network is barely functioning and most of the country's people use mobile phone networks run by private companies.

Jefferson is the first U.S. official to face charges under the Foreign Corrupt Practices Act, which prohibits corporate bribery overseas.