Bear attacks Girl Scout in her camping tent in USA

A bear tried to pull a Girl Scout out of her tent during a camping trip, the girl and scout officials said. 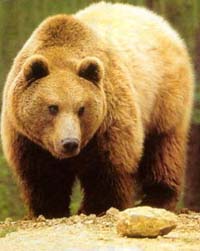 Bear attacks Girl Scout in her camping tent in USA

Celeste Tietz, 11, said Wednesday that she managed to grab a tent pole and slide out of her sleeping bag as the bear was tugging at it early Sunday morning at Camp Mosey Wood.

"Something started pulling me towards the front of my tent and tried to pull me out," she told The Express-Times of Easton.

Tietz of Franklin Township, New Jersey, and the other girls in the tent screamed for help. Adults then loaded the girls, about 15 of them, into a van and took them to the camp's mess hall.

Ann Meredith, chief executive officer of the Girl Scouts of Eastern Pennsylvania, said the camp will not allow girls to sleep in tents this coming weekend or the following weekend.

Campers and adult leaders get bear education when they register for camp, she said.

"Bears are a fact of life," Meredith said. "We're living in their habitat."