The United States has canceled the visas of 22 Costa Rican immigration officials suspected of selling visa stamps so that Costa Ricans could stay illegally. 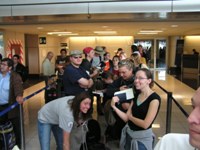 The officials worked as inspectors in San Jose's international airport, according to a U.S. Embassy official who was not authorized to give a name.

Costa Rica's immigration director, Mario Zamora, said the officials sold stamps in both Costa Rica and the U.S. that made it appear migrants had returned home before their U.S. visas expired, when in fact they were staying longer than allowed.

Foreigners must document both their entrances into and exits from the U.S. or risk losing their visas.

Zamora said the U.S. had been "key to stopping a secret business that had been operating for quite some time."

The officials will remain employed while authorities investigate, he said, although they will likely be transferred.