A millionaire couple accused of enslaving two Indonesian women remained jailed after a judge said keeping the couple under house arrest in their suburban New York mansion was inappropriate. 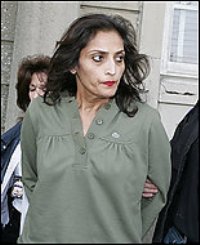 Varsha Mahender Sabhnani, 35, and her husband, Mahender Murlidhar Sabhnani, 51, both U.S. citizens originally from India, are charged in a federal court indictment with slavery and harboring undocumented citizens. One of the women was found wandering outside a doughnut shop not far from the couple's Long Island mansion.

Last week, U.S. District Court Judge Thomas Platt ruled that he would allow the couple to be freed on a combined $3.5 million (EUR2.6 million) bail, provided they remained under home detention with electronic monitoring and 24-hour surveillance paid for by the couple.

But, the judge said Monday he was unhappy with the deal prosecutors and defense attorney had worked out. He said that the couple needed more guards  rather than a single security guard in the basement and special lighting around the perimeter of the house.

"This is not what I had in mind at all," Platt said. He called the proposed bail package "an open invitation to a tea party."

Defense attorney Charles Ross expressed optimism that the judge's concerns could be met. The judge scheduled another bail hearing in the case for Wednesday.

The Sabhnanis, who operate a worldwide perfume business out of their mansion, were arrested May 13 after one of the Indonesian women was found wandering outside a nearby Dunkin' Donuts shop. The woman apparently had escaped the night before while putting out the trash, prosecutors said.

She showed her injuries and Indonesian passport to a manager at the shop and said, "Mister, mister, I want to go home, Indonesia," according to Indonesian Foreign Ministry spokesman Kristiarto Legowo.

The second woman was found when agents from Immigration and Customs Enforcement searched the house later that day.

The Sabhnanis have been charged with multiple counts of forced labor and harboring illegal residents and have pleaded not guilty. Each faces up to 20 years in prison if convicted.

The Indonesian women have since been cared for by a charity group.