Plane with 3 people on board crashes into California homes

A twin-engine plane with three people on board lost power and slammed into homes east of Los Angeles. 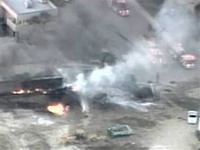 Plane with 3 people on board crashes into California homes

The pilot and two passengers suffered minor injuries. No one on the ground was hurt, said Ian Gregor, spokesman for the Federal Aviation Administration.

The plane came to rest atop a garage without catching a fire. Its wing rested on the roof of another home.

The Piper Seneca was approaching Cable Airport when it lost power and crashed into three homes. The plane departed from Van Nuys Airport in the San Fernando Valley.

Weather did not appear to be a factor. It was sunny with no clouds or fog.

Upland is about 45 miles (72 kilometers) east of Los Angeles.

Housing tracts surround the small airport. A plane crashed into a home in nearby Claremont on Dec. 14, 2003, killing the pilot.