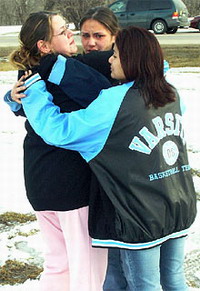 Jorge Murillo, 38, and Abel Garcia, 33, were at the wake of a child killed in a hit-and-run accident when at least two gunmen attacked them in the funeral home's parking lot, Mexico City prosecutor Gustavo Salas told reporters.

It was part of a wave of violence across Mexico that left at least six people dead over the weekend, including three children.

On Sunday, soldiers shot a man to death after he refused to stop at a military checkpoint near the border city of Nuevo Laredo, across from Laredo, Texas.

Hector Salazar, 27, was shot once in the back and died at a hospital, state police said.

Mexico's Defense Department said Monday it had no immediate information on the reported shootings in Sinaloa state, and the Sinaloa state police did not immediately return calls seeking comment.

Sinaloa Gov. Jesus Aguilar on Monday lamented the shooting, but said the army will remain in the state "to safeguard the security of its citizens."

The newspaper Reforma quoted Sinaloa police as saying the victims were members of two families traveling to a funeral in a remote area of Sinaloa, home to the powerful Sinaloa drug cartel.