A Geneva court has blocked the release of some of the 7.6 million Swiss francs (US$6.2 million; EUR4.6 million) stashed in Switzerland by former Haitian dictator Jean-Claude "Baby Doc" Duvalier. 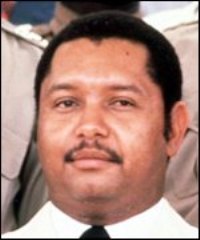 The decision comes days before a freeze on all of the ex-president's Swiss accounts is due to expire, which would allow the money to be returned to the Duvalier family, Marc Henzelin said.

"We received the notice that the order has been issued, so that our request has been accepted," he told The Associated Press.

It was not immediately possible to confirm the ruling with the court.

Henzelin's legal firm lodged a request with the cantonal (state) court of Geneva on behalf of two Haitians, a taxi driver and a priest, who were awarded damages against Duvalier worth US$750,000 and US$1 million respectively by a U.S. court in 1988.

The U.S. District Court in Miami also ordered US$500 million to be paid to the Haitian people under the Alien Tort Claims Act, according to Miami attorney Ira J. Kurzban who represented the claimants in the case.

Last week, a senior Swiss Foreign Ministry official warned that the money in Duvalier's Swiss accounts would have to be released on June 3 because all legal means to retain it had been exhausted.

The head of the ministry's international law department, Paul Seger, said last week that the government in Haiti tried to recover the funds after Duvalier was ousted in 1986, but the judicial process ground to a halt in the chaos that engulfed the Caribbean country during the years that followed. A temporary block imposed by the Swiss government has been in force since, but that is due to expire.

The latest court decision affects only one account, with the Geneva branch of UBS AG, held in the name of a foundation based in the tiny principality of Liechtenstein, Henzelin said. Fondation Brouilly is owned by a Panama-based company, which in turn is owned by members of the Duvalier family.

Henzelin said it was not known at this point how much money was in the Geneva account. Duvalier had at least two further accounts in Lausanne and Zurich, though the latter could have been closed, he said.

To recover money on behalf of Duvalier's victims, a Swiss court would have to be convinced that the funds were of criminal origin.

On Thursday, Haitian Foreign Minister Jean Renald Clerisme said a Central Bank official would be sent to Switzerland to make a final attempt at recovering some or all of the money, which Duvalier allegedly stole from state coffers during his time in power.