A spectacular early morning fire caused heavy damage to the clipper ship Cutty Sark, a proud relic of the 18th-century China trade that was designed to be the fastest ship of its day. 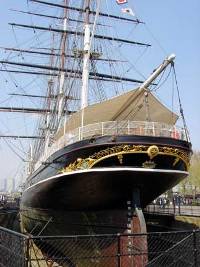 Damage causedby the fire, which broke out in a dry dock where the ship was undergoing restoration, will add millions to the cost of refurbishing one of London's proudest maritime relics.

The London Fire Brigade and the Forensic Science Service were investigating the cause.

Within hours of the flames being doused, officials responsible for the graceful sailing ship said they were determined to carry on with a four-year restoration project.

"We're going to redouble our efforts to ensure that the ship is open, available, back and running in the future," said Chris Livett, the chairman of Cutty Sark Enterprises, responsible for restoring the world's only surviving tea clipper.

"I think when we finish with this project, she will be better than she was ... in a complete state a year ago," Livett told reporters.

"At the moment we are treating the fire as suspicious, as we would do any fire of this scale and importance," police Inspector Bruce Middlemiss said. Surveillance cameras showed several people in the area at the time the fire started, but there was no indication that any had been involved in igniting the fire.

"There is no evidence or intelligence to lead us to think this was an arson," Middlemiss said.

The ship was the world's only surviving example of an extreme clipper, regarded as the ultimate development of a merchant sailing vessel. Most of the original hull had survived since the ship was built for the 19th-century tea trade.

Cutty Sark had been closed to visitors since last year for a 25 million pound (EUR37 million; US$50 million) renovation.

The leaders of the restoration project said the damage was not as bad as they feared.

However, "this will have resulted in millions and millions of pounds of damage. This is a ship that belongs to the world, and we're going to need financial help," said Doughty, who estimated that every day of additional work would cost some 10,000 pounds (EUR14,700; US$20,000).

Ian Bell, manager of the restoration project, emerged from an inspection of the ship with soot on his cheeks but an optimistic message about the condition of the ship's iron frame.

"Initial indications suggest we don't have any massive distortions of the ship," Bell said.

"I think the most disturbing thing for me is the smell in the air," Doughty said. "Anyone who has been on the Cutty Sark knows it has a very distinctive smell from the timber, from the rope. Tragically that smell now pervades southeast London."

Cutty Sark left London on its first voyage on Feb. 16, 1870, proceeding around Cape Hope to Shanghai 3Ѕ months later. The ship made only eight voyages to China in the tea trade, as steam ships replaced sail on the high seas.

The ship was used for training naval cadets during World War II, and in 1951 it was moored in London for the Festival of Britain. Shortly afterward, the ship was acquired by the Cutty Sark Society.