Former U.S. astronaut Lisa Marie Nowak waited nearly an hour at the airport for the romantic rival she allegedly attacked, donning a trenchcoat before security cameras as the woman looked for her bags. 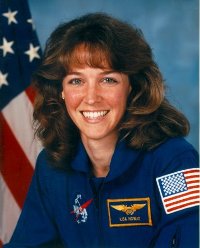 The security footage from Orlando International Airport depicts Nowak arriving at 12:33 a.m. Feb. 5, then following 10 to 15 meters behind Air Force Capt. Colleen Shipman as Shipman went to retrieve her bags.

Nowak, 44, has pleaded not guilty to attempted kidnapping, burglary with assault and battery in the case. She was arrested in February after police say she attacked Shipman in the airport parking lot, shortly after the video from inside the airport was taken. Nowak allegedly drove from Houston to execute the attack, wearing an astronaut diaper so she would not have to stop during her 900-mile (1,450-kilometer) trip.

No footage of the alleged attack was included on the video released Friday.

The judge has asked both the prosecution and defense to limit contact with the media, so neither police nor prosecutors would discuss the tape. A spokeswoman for Nowak's defense team declined to comment on the video.

Before Shipman arrives, Nowak goes off-camera for about five minutes and reappears, possibly wearing a new hat and glasses. It is difficult to tell whether she was wearing them before, because previous footage was shot from a distance.

Nowak stands and intermittently paces, carrying a bag on one shoulder. At one point she hurriedly walks to the baggage escalator, then reappears moments later.

Shipman arrives about 50 minutes after the cameras show Nowak appear in the waiting area, and Nowak follows when she leaves.

Nowak appears to be standing just a few feet away as Shipman waits for her bags. After a couple minutes, the former astronaut pulls on and buttons a light-colored trench coat.

The end of the tape, nearly three hours after Nowak's first security camera showing, depicts someone with a light trenchcoat running.

Authorities have said Nowak, who was married and had three children, had an affair with Shipman's boyfriend, astronaut Bill Oefelein. She allegedly followed Shipman to the parking lot and pounded on her window saying she need help.

An arrest affidavit says Nowak pepper-sprayed Shipman when the victim lowered her car window to talk to her.

Police said they found a BB gun, a new steel mallet, a knife and rubber tubing in Nowak's possession. NASA released Nowak from the astronaut corps a month after her arrest. Her trial has been moved to September.