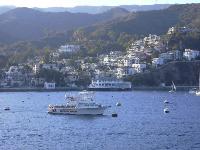 Even though the six-square-mile (15.5-sq. kilometer) blaze was only 35 percent contained on Friday, the wildfire and thick smoke were confined to the tinder-dry brush in the mountains of this narrow island 30 miles (48 kilometers) off Los Angeles.

Avalon's cobblestone streets, brightly painted bungalows, landmark casino and tourist hotels were mostly spared, with only one home and several outbuildings burned. No one was seriously injured.

A day earlier, flames bore down from the mountains, raining ash and chaos on the crescent harbor. Evacuated residents clambered onto ferries that passed U.S. Navy hovercrafts packed with fire trucks from the mainland.

Many were workers who cook and clean for vacationers. Others were at vacation homes as the summer tourist season geared up.

By Friday afternoon, one ferry full of residents was headed back to the island from Long Beach, and a relay of water-carrying helicopters saturated a hillside at the edge of town where smoke curled into the blue sky. The step appeared intended to extinguish any lingering hot spots.

The cause of the fire, which erupted Thursday afternoon in the 76-square-mile (197-sq. kilometer) island's rugged interior, had not yet been determined.

The island's relative isolation has proven a liability before. A 1915 fire that started in a hotel burned half the town's buildings.

The island's romantic vibe was memorialized in the 1958 hit "26 Miles (Santa Catalina)." Before private jets and third homes became standard fare for the rich and really famous, Santa Catalina was a celebrity haunt for the likes of Theodore Roosevelt, Winston Churchill and Cecil B. DeMille.

About 300 movies have been shot on the island or in nearby waters, including "Mutiny on the Bounty," "Chinatown," "Jaws" and "Apollo 13."

Just days before and about 50 miles (81 kilometers) away on the mainland, crews beat back flames in Los Angeles' major park that singed a neighborhood of multimillion-dollar homes. That was the third menacing fire in the Hollywood Hills this spring and wildfire season here isn't supposed to heat up until the fall.

Around the country, firefighters battled a wildfire in Georgia and northern Florida that burned 179,940 acres (72,821 hectares) or 281 square miles (728 sq. kilometers) since a lightning strike ignited it a week ago.

The fire, which started last Saturday in the middle of the Okefenokee National Wildlife Refuge, took just six days to grow larger than a wildfire that has burned 116,480 acres (47,139 hectares) of Georgia forest and swampland over more than three weeks.

In Georgia, the fire posed a potential threat to the tiny city of Fargo, where 380 people live about eight miles west of the Okefenokee Swamp. Occupants of about 15 homes in a subdivision were asked to leave as a precaution because of the smoke and ash.

About 570 homes in northern Columbia County, Florida, were evacuated overnight, and heavy smoke blanketed the area. A haze was seen in Miami, more than 300 miles (483 kilometers) away.

To the north, a wildfire grew to nearly 86 square miles (223 sq. kilometers) in northeastern Minnesota and across the border into Canada, cutting power and phone lines to many resorts and lake homes.

The fire, driven by high wind Thursday and fed by drought-parched forest, has already destroyed 45 structures and was threatening about 200 more. The chance of desperately needed rainfall was still days away.