A 32-year-old woman was mauled to death by a captive tiger at an exotic animal farm in British Columbia while at least three children watched in horror. 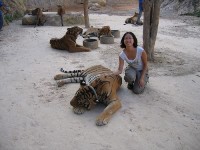 The woman, Tanya Dumstrey-Soos, even spoke with her fiance, Kim Carlton, the owner of the farm, by cell phone as she lay dying after the attack, her employer said in an interview Friday.

"Before she passed away Kim did say that he did have a chance to talk to Tanya," said Scott Nelson, who employed Dumstrey-Soos as a receptionist and saleswoman at the 100 Mile House Advisor newspaper.

"He said the two were able to say they loved each other and he was obviously horrified."

Nelson, who is also the mayor of Williams Lake, British Columbia, said that Dumstrey-Soos and Carlton had recently become engaged to be married.

Carlton "didn't think the tiger had bit her. It's that she had a dress on and she was standing there and he was playing with the dress and grabbed her legs. She was standing outside the cage and talking to Gangus, the cat swatted at the legs," Nelson said.

He said Gangus was the only one of the three tigers on the farm that had not been declawed.

A number of youngsters, including one of Dumstrey-Soos' children, witnessed the attack, said Constable Annie Linteau of the Royal Canadian Mounted Police. Nelson believed that Carlton's children, Dakota, 12, and Kodiak, 15, also saw her being maulted.

"We were obviously horrified, more horrified that the young kids saw it, that they were there and obviously our hearts are with them," Nelson said.

Regional coroner Bruce Chamberlayne said Dumstrey-Soos was taken to a hospital in the town of 100 Mile House after the attack but could not be revived.

The farm in the interior of British Columbia is called Siberian Magic. Carlton puts on exotic and magic shows and also sells services such as photos with the big cats.

The RCMP said all the animals remained secured on the premises, about 40 kilometers (25 miles) east of 100 Mile House. Among the animals at the farm are three tigers, a lion and a lemur.

After the incident, British Columbia Agricultural Minister Barry Penner said authorities would determine whether there is a need to change regulations that allow private citizens to keep exotic animals. The Society for the Prevention of Cruelty to Animals has called for legislation to ban the practice.

Siberian Magic's Web site invites people to visit the Bridge Lake, British Columbia, facility to experience "the wonderful worlds of magic and exotic animals." The farm is about 400 kilometers (250 miles) northeast of Vancouver.

"Visit our animals up close and personal. Capture the memories and have your photo taken with our amazing Siberian tiger, Kisa, or our African lion, Sarmoti, as well as many other wonderful animals."

The site claims the company educates people about exotic animals in a "safe and enjoyable way."

Marcie Moriarty, general manager of cruelty investigations for the Society for the Prevention of Cruelty to Animals, described the facility housing the animals as a "public safety catastrophe."

"The tigers are being kept in 12-by-12-foot (3.6-by-3.6-meter) chain-link enclosures with a mere padlock on the enclosure. The animal owner had admitted to walking the tigers, his kids feed them," she said.

She said Carlton has been investigated by the SPCA since November 2005 when he moved his tigers to the 100 Mile House area.

After notifying regional authorities about their concerns, the SPCA tried for months to seize the animals but there was not any room at any facility, including the Calgary Zoo, to take the exotic animals, Moriarty said.

"The use of exotic animals in entertainment is simply playing with fire," Moriarty said.