32 year-old woman mauled to death by a tiger 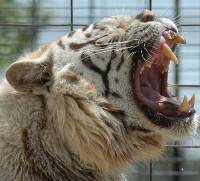 32 year-old woman mauled to death by a tiger

A 32 year-old woman was mauled to death by a tiger owned by her boyfriend in western Canada.

Regional coroner Bruce Chamberlayne said the woman was taken to a hospital after the attack Thursday afternoon but could not be revived.

Chamberlayne did not release the woman's name pending notification of family members.

Global TV reported the victim was the girlfriend of the tiger's owner, Kim Carlton.

He said it was unclear what happened to the animal.

The property where the incident occurred, about 150 miles (240 kilometers) northeast of Vancouver, reportedly offers photos with the cats.