A South Korean tycoon called himself a "silly father" Friday and acknowledged he lost self-control in an alleged brutal revenge attack after his son was hurt in a karaoke bar fight. 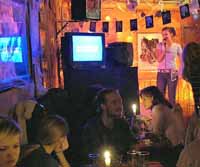 Speaking after a court hearing to determine whether he will face arrest, Hanwha Group Chairman and CEO Kim Seung-youn said he regrets he "failed to control impulsive emotion" and apologized for causing trouble.

Prosecutors are seeking an arrest warrant for Kim on charges of kicking, punching and using a steel pipe to attack bar workers allegedly involved in a scuffle with his 22-year-old son on March 8 at a karaoke club.

The Seoul District Court questioned Kim at a hearing Friday to decide whether accept or reject the request. It was not immediately clear when the court would rule.

"I hope there will never be a silly father like me again," Kim told reporters after the hearing.

The dramatic details of the case, which media have likened to a gangster movie, has drawn intense public interest in South Korea, where the heads of family controlled conglomerates wield great economic, political and social clout.

The younger Kim, a student at Yale University, reportedly suffered an injury that required 11 stitches in the scuffle on stairs outside the karaoke pub.

Victims have told police the elder Kim and his bodyguards took them to a mountainous area south of Seoul, where Kim himself allegedly assaulted them, including hitting one of them on the back with a 5-foot (1.5 meter) steel pipe.

They have also told police Kim later sought out another man at a bar in central Seoul and had his son beat him, according to a police statement.

Hanwha was established in 1952 as the Korea Explosives Corp. It later developed interests in petrochemicals, finance, insurance, construction and retail. It also owns the Hanwha Eagles professional baseball team.

Kim, South Korea's ninth-richest man, is worth about 852 billion won (US$920 million; EURO 683 million), according to Chaebul.com, a Web site that tracks the fortunes of the conglomerate chiefs and their families.