A man was arrested and charged for allegedly burying alive his 6-day-old twin daughters near his home in western India. The baby girls later died, police said Friday. 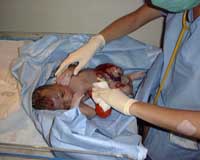 Samantsinh Sodha wanted a son but his wife gave birth to baby girls last week in Nakhtrana, a town in the western state of Gujarat, said G.S. Malik, superintendent of police.

Indian society has long favored boys, who do not require the enormous dowry payments that bankrupt many poor families when their daughters marry.

Sodha, a gas station attendant, took the twins away while his wife was sleeping and buried them in a pit Wednesday night, Malik told The Associated Press.

Police arrested him on Thursday, the police officer said.

It was not immediately known if Sodha had a lawyer who could comment.

Many expectant couples in India will abort a fetus if they find it is a girl.

International groups say the widespread practice of aborting female fetuses has killed more than 10 million female fetuses in the last two decades, leading to an imbalance in the ratio between males and females in India.