A bomb exploded in a private medical laboratory in the eastern Indian state of Assam, wounding five people. 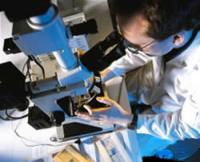 The bomb was hidden in a bag and exploded inside the medical facility's waiting room in the town of Sivasagar, 350 kilometers (217 miles) east of the state capital of Gauhati, police officer D. Choudhury said.

The wounded were taken to hospital, he said. Police were investigating the attack, Choudhury said.

No one claimed responsibility for the blast, but police officials said they suspect the state's biggest separatist group may have been involved.

The group, the United Liberation Front of Asom, has been fighting for decades for an independent homeland in Assam. It was blamed for the deaths of 75 people in a series of attacks this year, after Indian authorities called off a temporary truce with the rebels and resumed military offensives.

At least 10,000 people in Assam, mostly civilians, have died over the last three decades in fighting between government forces and separatists, including the ULFA and the National Democratic Front of Bodoland, which wants autonomy for Assam's Bodo ethnic minority.

The militants say the central government in New Delhi, 1,600 kilometers (1,000 miles) to the west, exploits the northeast's rich natural resources while ignoring the region's development.