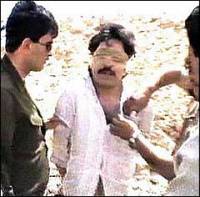 The Islamic State of Iraq, an umbrella group of Iraqi insurgents including al-Qaida, had issued a video on Tuesday threatening to kill the 9 men unless the government responded within 72 hours to their demands, including the release of all Sunni Muslim women from Iraqi prisons and the handover "of those who raped the Iraqi woman and killed our brethren in Tal Afar."

"As the deadline given by the Islamic State of Iraq ended, the jurisdiction court decided to execute God's verdict against those apostates," a statement posted with the video read.

The video showed the deaths of five army officers and four police officers at the hands of a masked militant dressed in black, who was accompanied by two similarly attired colleagues. The bodies of the soldiers were shown on the dusty ground after the execution.

The authenticity of the video, posted on a Web site where the group often releases messages, could not be independently confirmed.

It was the fourth time the Islamic State of Iraq has claimed to kidnap Iraqi security officials in connection to the reported rape of a woman in the northern Iraqi town of Tal Afar. The 50-year-old Sunni Arab woman came forward in February and said Iraqi soldiers raped her when they raided her house searching for weapons.

In Tuesday's video, the group said the 9 men, who were shown in uniform, were abducted north of Baghdad in Diyala province. The nine each give their names and ranks, and several of them called on their comrades to quit the security forces.

There was no immediate confirmation from the government that the men were seized.