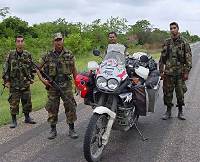 Hebert Aguilar, police director in the western state of Tachira, told the state-run Bolivarian News Agency that the four Colombians and one Venezuelan were traveling on a bus when they were collared on Wednesday by local police.

But he did not say what group they might belong to or indicate which government they might be trying to overthrow.

"The suspected guerrillas possibly entered the country with the aim of committing crimes along the Colombian-Venezuelan border," Aguilar said.

Venezuelan authorities were working with Colombian officials to determine the identities of the suspects, Aguilar said.