A high school in Colorado was locked down after two men in camouflage and ski masks enter the building more than an hour before classes. 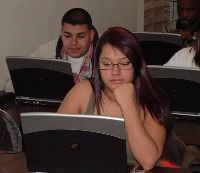 Officers from various law enforcement agencies could be seen outside Boulder High School, and the entrances to the parking lot and the building were blocked off.

Boulder Police spokeswoman Julie Brooks confirmed that the school was locked down and that authorities were on the scene, but she released no further details.

School district spokesman Briggs Gamblin said the school was locked down and police were called in after a food service worker reported seeing the two suspicious men early Thursday. He told CNN the start of the school day was delayed until at least midmorning to give officers time to search the building and grounds.

Colorado was the site of one of America's most infamous school shootings. On April 20, 1999, two students at Columbine High School south of Denver killed 12 classmates and a teacher before killing themselves.