Two Azerbaijani journalists were convicted of inciting hatred with an article seen as criticizing Islam and sentenced to prison after a trial. 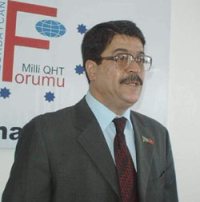 A district court in the capital, Baku, sentenced newspaper reporter Rafiq Tagi to three years and editor Samir Huseinov to four years in prison. Both have been in jail since they were arrested in November over an article Tagi wrote in the small newspaper Senet, edited by Huseinov.

The November article asserted that Islam has suffocated people, pulled them away from freedom and hindered humanity's development, and said that the Prophet Muhammad created problems for Eastern countries.

The article sparked angry protests by conservative Muslims, and Huseinov demanded in court that he and Tagi be provided security, citing fear for their lives. "I have already been told that even in prison, we will both be killed," he said.

Some participants in protests over the article in a village near Baku whose conservative Muslim community has clashed with the authoritarian, secular government called for Tagi's death. A group of conservative Muslims attended the trial, criticizing the defendants and at one point rushing the bars behind which they sat.

Both men maintained their innocence, and both had faced a maximum of five years in prison.

Their trial also deepened concerns about freedom of speech and foreign influence in the oil-rich former Soviet republic _ particularly from neighboring Iran, which has a large ethnic Azeri minority and is often seen as seeking to boost its clout in the smaller nation.

The defendants' lawyer, Isakhan Asurov, has said he would appeal if the men were convicted.

Asurov could not immediately be reached for comment after the trial.