Workers at two Airbus plants in France, striking over shrunken bonuses, voted Thursday to extend their walkout until a much-awaited shareholder meeting by the plane maker's parent company. 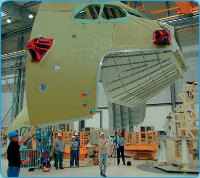 Some 2,000 workers at plants in Saint-Nazaire and Nantes in western France walked off the job on Wednesday, bringing all work at the factories to a halt. They voted to extend the strike until Friday, when European Aeronautic Defence & Space Co. is scheduled to hold a shareholder meeting in Amsterdam.

Airbus' financial difficulties mean workers are getting no variable bonus this year. The minimum fixed bonus guaranteed by the company is estimated by the Force Ouvriere union at between EUR2.82 and EUR10 (US$3.83 and US$13.55), depending on the employee's salary.

In previous years, most employees at the troubled plane maker received two bonuses of EUR1,900 (US$2,580) each.

"If anyone is not responsible for the situation at Airbus, it's the workers," said Bernard, a CGT labor union representative at the Nantes plant. "We produced more planes this year than last year, and next year we'll produce even more. All that to find ourselves in this situation."

Two years in accumulated delays to Airbus' A380 superjumbo have wiped about Ђ5 billion (US$6.5 billion) off profit forecasts for 2006-2010. The company has announced a contentious restructuring plan aimed at clawing back the same figure in savings over the period.

The Saint-Nazaire plant is among six Airbus factories to be sold or closed under the plan that would slash 10,000 jobs Europe-wide.