Relations between Russia and Estonia reached a new low as pro-Kremlin youth activists in Moscow staged an aggressive protest against Estonia's ambassador over the Baltic state's removal of a Soviet war memorial from central Tallinn. 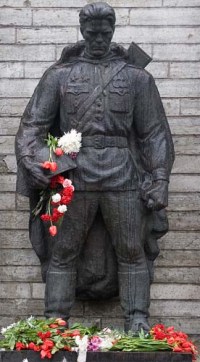 The dispute rooted in starkly divergent interpretations of 20th century history has deepened into a serious diplomatic problem and threatens to strain already testy relations between Russia and the European Union, which on Wednesday pressed Russia to ensure it protects the Estonian Embassy.

Russians regard the Bronze Soldier war memorial in Tallinn as a tribute to the millions of Soviet soldiers who died fighting Nazi Germany, but for many Estonians it is a bitter reminder of five decades of postwar Soviet occupation. Serious rioting, mostly by Estonia's ethnic Russian minority, broke out last week over removal of the statue from a square in the center of the capital to a military cemetery.

NATO spokesman James Appathurai said intimidation at the embassy and threats to the safety of Estonian diplomats were "unacceptable and must be stopped immediately."

Estonian Ambassador to Russia Marina Kaljurand had summoned the media to the offices of the Moscow newspaper Argumenty i Fakty to demand that authorities increase security at the Estonian Embassy, which has been blockaded by pro-government activists since last week. As she arrived, dozens of activists with Nashi (Ours) and other youth groups mobbed her and stormed into the building, Kaljurand said.

"Apparently the attack was aimed against me, but nobody got through to me. Nobody touched me," Kaljurand told reporters, after police tackled protesters and dragged them from the building.

Sweden's ambassador, Johan Molander, was also attacked by an angry crowd as he left the Estonian Embassy after a meeting there, Swedish Foreign Ministry spokesman Andre Mkandawire said. Protesters kicked his car and tore the Swedish flag off the vehicle, he said.

The attacks were the most aggressive protests in Russia against the removal of the memorial, and prompted stern statements by EU diplomats.

While Moscow has taken little official action over the movement of the monument, the raucous response from pro-Kremlin activists could deepen EU concern about the conduct of an increasingly assertive Russia, whose relations with some newer EU members, including Estonia, are badly frayed.

Russian-EU ties have been strained by concerns over resource-rich Russia's intentions in the energy industry and over what critics say is the trampling of democracy and civil rights under President Vladimir Putin. A dispute between Russia and Poland has blocked talks on an accord that would deepen Russia-EU relations.

Estonia's president urged Russia to "try to remain civilized," and its Foreign Ministry protested Wednesday's incident. "Physical attacks on the Estonian Republic diplomatic representative are unprecedented and absolutely unjustifiable," it said in a statement.

Spouses and children of some diplomats have been sent home, Estonian officials said.

Sweden's Foreign Ministry said it summoned the Russian ambassador in Stockholm to deliver "a sharp protest," saying the incident involving its ambassador was "a flagrant and unacceptable violation against the Vienna Convention" on diplomatic relations.

The group Nashi later issued an apology to Sweden on its Web site.

Russian Foreign Ministry Spokesman Mikhail Kamynin said Moscow would continue fulfilling its international obligations to protect foreign diplomats, but suggested the Estonians were to blame for the escalating crisis.

"We proceed from the fact that such high tensions and such a reaction of civil society have been provoked by the actions of the Estonian side," the Interfax news agency quoted Kamynin as saying.

The immensely costly World War II victory is held sacred by millions of Russians as perhaps the proudest moment in their country's history. Russian politicians adamant in their view of Soviet soldiers as liberators and not occupiers have unleashed a torrent of rhetoric calling the monument's removal blasphemy.

Since late last week, demonstrators have camped out across from the Estonian Embassy and erected barriers to prevent diplomats from coming and going freely. Over the weekend, activists pasted mock "Wanted" posters with Kaljurand's face on them on buildings in the neighborhood.

Kaljurand said there had been hacking attacks against Estonian government Web sites and charged that some came from Internet addresses registered to the Kremlin. She said the EU was considering "concrete measures with regards to Russia" in connection with the cyber attacks.

Kremlin spokesman Dmitry Peskov dismissed the accusations in comments to The Associated Press, saying the attackers must have used a fake Kremlin IP address to tarnish Russian authorities.