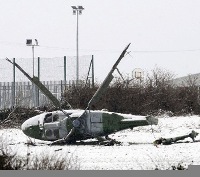 The Huey helicopter was providing support for troops on the ground as part of an operation against leftist rebels, the military said. Contact was last made with the aircraft Tuesday night.

The air force was investigating the cause of the crash near the city of San Vicente del Caguan, 280 kilometers (175 miles) south of the capital.

Southern Colombia has a strong presence of leftist rebels fighting an armed conflict now in its fifth decade.