Sinkhole opens up at the end of bridge in Seattle 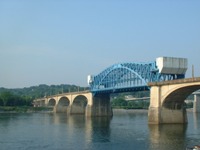 Sinkhole opens up at the end of bridge in Seattle

A sinkhole opened up morning at the end of a bridge, swallowing two unoccupied cars, after a water main break undermined the road.

University Bridge over Portage Bay was closed as a precaution after the sinkhole was reported. Officials were not sure if the sinkhole threatened the structural integrity of the bridge southwest of the University of Washington.

No injuries were reported from the sinkhole, which swallowed two cars that had been parked under the south end of the bridge, Seattle police spokesman Sean Whitcomb said.

Andy Ryan, spokesman for Seattle Public Utilities, said the water flowing out of the pipe was being shut down slowly to avoid problems with the system. The utility believes there is a horizontal break in the pipe.