May Day demonstration gets out of control

After a May Day demonstration against right-wing extremism got out of control, more than 300 leftist rioters set fire to train tracks and vandalized streetcars and buses in the western German town of Dortmund on Tuesday. 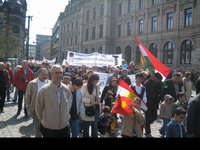 May Day demonstration gets out of control

The fires were extinguished after an hour, but some tracks and wires were so heavily damaged that train service was disrupted, police said. Four police officers were injured, one seriously. More than 130 protesters were taken into custody, the number of injured demonstrators was not known, a police spokesman said Tuesday night.

"This was everything else but a peaceful May 1," Wolfgang Wieland said.

About 1,800 persons had participated in the protest against right-wing extremists in Dortmund. Later on Tuesday, about 650 members of right-wing groups gathered for a demonstration in a different part of the city, Wieland said.

"Luckily, our colleagues managed to keep the right-wing extremists and their violent counterparts away from each other," Wieland said.

The riots in Dortmund were among several outbreaks of violence on May Day in Germany. In the eastern town of Erfurt, several protesters were injured during a right-wing demonstration and various counterprotests, police reported. About 1,300 members of the far-right NPD party marched through the city center, and some hurled bottles and cobblestones at police. Left-wing protesters also caused "severe damage of property," a police spokeswoman said. She would not give details on damage or the number of arrests.

In cities all over Germany, demonstrators marched against right-wing extremism, but most protests remained peaceful.

In Berlin, peaceful daytime demonstrations turned violent Tuesday night. Protesters in the Kreuzberg neighborhood threw bottles, stones and fireworks at police and set fire to garbage cans. Several officers and demonstrators were injured, but police could not give details. Police said they detained rioters, but could not say how many. More than 5,000 officers were on duty in the German capital Tuesday night.

Despite the violence, May 1 clashes in Berlin seemed to be falling short of that in some previous years.

On Monday night, 14 officers were slightly injured and police took 119 people into custody for throwing stones and bottles, officials said.

In 2006, 179 people were arrested on May 1 in Berlin and 68 police officers injured, most not seriously.

Police in Berlin are keeping an eye on radical protesters before this year's G8 summit in Heiligendamm; there were also fears that the 20th anniversary of the first such disturbances might spur increased violence. In 1987, a supermarket was burned down amid street battles with police but in recent years the rioting has waned.