Survivors of the London suicide bombings in 2005 led new calls for an independent inquiry into the blasts after it was revealed intelligence agents were tipped off about an imminent attack but failed to act. 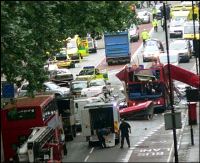 Links between two of the subway attackers and a group planning a spree of bombings across southern England emerged Monday, after five of the bomb gang were jailed for life. The ties between the men had been kept secret to ensure a fair trial.

Authorities first insisted the attackers were unconnected and unlikely to have been directed by overseas terror chiefs.

Armed with the fresh details, relatives of the 52 commuters killed in the July 7, 2005 blasts, survivors of the blasts and opposition lawmakers leveled a new demand for an independent inquiry.

"We want answers, we want an independent inquiry," said Jacqui Putnam, a survivor.

The group delivered a letter to Home Secretary John Reid asking him to sanction a review. Reid previously rejected an inquiry as too costly and likely to distract officials from counterterrorism work.

Survivors said they were appalled by the admission by Britain's domestic intelligence agency MI5, that it had transit bombing ringleader Mohammed Siddique Khan and an accomplice under surveillance in early 2004.

The men were tailed on at least four occasions as agents investigated the fertilizer cell followed on freeways, pictured mingling with terror suspects at a service station and heard in bugged conversations discussing terror on the 'phone.

But the agency which also placed a tracking device in Khan's Honda car did not rank them as a priority.

Babar said al-Iraqi sat at the apex of a terror chain stretching from Pakistan's Himalayan foothills to rural England.

"The ultimate emir (prince) on top was Hadi," Babar testified.

His bugged conversations with Khan and Khyam tipped authorities off to the fertilizer plot in 2003, officials said, but crucially not to the transit bombings.

"Britain's government is now very quickly realizing that the support infrastructure for these cells is in place and that it's transnational," Ayers said. "They've had a 180 degree turnaround in their thinking."

Prime Minister Tony Blair defended his intelligence agencies Tuesday, saying they had foiled a number of plots. Security officials say MI5 has halted at least 11 attacks on Britain since Sept. 11, 2001, including the fertilizer bomb plan.