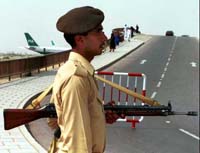 A small bomb exploded at a canteen in the main lounge of an international airport in northwestern Pakistan on Saturday, causing minor damage but no injuries, officials said.

Dozens of passengers were in the lounge of the Peshawar International Airport at the time, but the "low intensity explosive device caused no casualties," said Zahoor Ali Shah, the airport manager.

"It was a homemade bomb, but we don't know who had planted it," he said.

Shah said no flights were canceled after the blast, and officers were still investigating.

Peshawar is the capital of North West Frontier Province bordering Afghanistan. A car bomb outside the Peshawar International Airport killed one person in December 2006.