A nationwide blackout hit Colombia, with authorities struggling to determine the cause of the electrical grid's collapse. 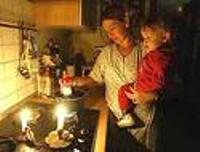 President Alvaro Uribe told journalists in the southern city of Cali that authorities would "know in a few minutes" the cause of the blackout, which took place approximately at 10:15 a.m. local time (1515 GMT).

He said the blackout "appears to have affected the entire country."

Luis Alarcon, manager of state-controlled electricity distributor ISA, told Caracol Radio that the power outage appears to have begun with an undetermined technical glitch at a substation in Bogota and quickly spread to the rest of the country.

He said work crews had re-established power to about 20 percent of the country and hoped to reconnect the capital Bogota and other cities in a few hours.

There was no indication it was the result of a terrorist attack.

Leftist rebels routinely sabotage electric transmission lines as part of their four-decade old campaign to overthrow the government, but such attacks usually have a limited impact.