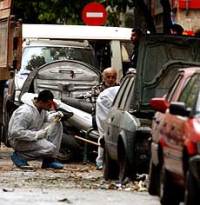 A police spokesman said at least one patrol car was burned. There were no injuries or arrests.

The attack was carried out by a group of 30 to 40 masked youths in the capital's Exarcheia district, the spokesman said.

Earlier Thursday, a group of suspected anarchists threw petrol bombs at a guard post outside a riot police camp in Zographou, in eastern Athens. There was minor damage, but no injuries.

The attacks on police targets followed a spate of overnight firebombings on a bank and parked vehicles.

Two embassy cars were damaged outside the home of Uruguay's ambassador to Greece when small cooking gas canisters exploded underneath them, in the Nea Erithrea area of northern Athens.

A branch of the National Bank of Greece was damaged in a gas-canister attack in the central Pangrati area, and five cars and a motorcycle were burned in the same part of the city.