Six people were killed when severe storms spawned a tornado that struck a small community near the Mexican border Tuesday, officials said. 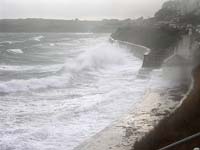 An unknown number of people were also injured, stretching the resources of the local hospital in Eagle Pass, Delacruz said.

"We're still getting more and more people into the hospital, so I would think a sizable amount of injuries," Delacruz said.

More than 200 emergency responders, including National Guard units attached to the Border Patrol, were conducting search and rescue efforts, he said. Their door-to-door checks were halted late Tuesday as another series of dangerous storms swept the area.

The six fatalities were reportedly in one residence, Delacruz said.

The thunderstorm that produced the deadly tornado developed over Mexico and moved southeast over the Rio Grande and across Maverick County, said Clay Anderson, a senior forecaster with the Austin-San Antonio office of the weather service.