An al-Qaida-linked group claimed responsibility for a suicide truck bombing that killed nine U.S. paratroopers in the worst attack on American ground forces in Iraq in more than a year. 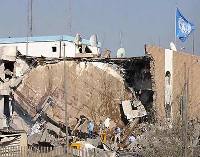 The Islamic State of Iraq, an umbrella group of Sunni militants that includes al-Qaida in Iraq, said it was behind Monday's double attack on a U.S. patrol base in Diyala province northeast of Baghdad an area that has seen violence spike since American troops surged into the capital to halt violence there. The U.S. military only confirmed one truck bombing.

"The first knight exploded his truck on them and he was followed by his brother in the second truck, exploding it on what remains from the soldiers inside the headquarters," said the statement, posted on a militant Web site.

The victims were all members of the Army's 82nd Airborne Division, said a spokesman for the Fort Bragg, N.C.-based unit. It was the highest number of casualties for the division since the war began, Maj. Tom Earnhardt said.

"We are recovering, supporting the families during this time of loss, praying for them and continuing our mission," said Lt. Col. Michael Donnelly, the U.S. military spokesman in northern Iraq. "The enemy brings nothing to benefit the people _ nothing."

In its Web posting Tuesday, the Islamic State of Iraq, an insurgent umbrella group that includes al-Qaida, put the number of Americans killed at 30.

"Almighty God has guided the soldiers of the Islamic State of Iraq to new methods of explosions," it said without elaborating. The message appeared on a Web site that frequently airs communications from militants, but its authenticity could not be independently confirmed.

It was single deadliest attack on ground forces since Dec. 1, 2005, when a roadside bomb killed 10 Marines and wounded 11 on a foot patrol near Fallujah. Twelve soldiers died when a Black Hawk helicopter crashed in Diyala on Jan. 20. The military said it might have been shot down but the investigation is still ongoing.

The use of a suicide bomber in a direct assault against U.S. forces was unusual. Militants, seeking to avoid American firepower, have mostly used hit-and-run ambushes, roadside bombs or mortars on U.S. troops.

On Feb. 19, insurgents struck a U.S. combat post in Tarmiyah, about 50 kilometers (30 miles) north of Baghdad, killing two soldiers and wounding 17 in what the military called a "coordinated attack." It began with a suicide car bombing followed by gunfire on soldiers pinned down in a former Iraqi police station where fuel storage tanks were set ablaze by the blast.

American troops are facing increasing danger as they step up their presence in outposts and police stations in Baghdad and areas surrounding the city, as part of the security crackdown to which U.S. President George W. Bush has committed an extra 30,000 troops.

Sunni militants are believed to have withdrawn to surrounding areas such as Diyala where they have safe haven. The U.S. command also deployed an extra 700 soldiers to the province last month.

According to a senior Pentagon official, Monday's attack involved suicide bombers in two large dump trucks. One of the trucks got very close to the Sadah patrol base building, and the other one was a bit further away, the official said, adding that at least some of the casualties may have been caused by the collapse of two walls of the structure.

The official, who spoke on condition of anonymity because the information has not yet been released, also said that 15 of the 20 troops who were injured have returned to duty.

In telephone interviews, residents of the Ameen area south of Baqouba on Tuesday described what they believed was the same attack that killed the nine soldiers, though the U.S. military did not confirm the accounts. They spoke on condition of anonymity out of fear for their safety.

The residents said gunmen first fired on American snipers at a U.S. base housed in an old Iraqi primary school, then a suicide car bomb rammed a checkpoint at the school's entrance, breaking through blast walls and other fortifications. The first explosion left a path for a second suicide vehicle, a truck, to approach the building, the witnesses said.

Several American soldiers were caught beneath the building as it collapsed in the explosion, the residents said.

Another U.S. soldier was also killed Monday in a roadside bombing in Diyala, the military said _ bringing the daily American death toll to 10. A British soldier was also shot to death while on patrol in the southern city of Basra, officials said.

The deaths raised to 85 the number of U.S. service members who died have in Iraq in April, making it the deadliest month for American troops since December, when 112 died.

Police in the same province as the attack on the U.S. base said gunmen disguised as Iraqi soldiers killed six Iraqis and burned five homes Tuesday in an unrelated attack. South of the capital, a family of seven was shot to death in their beds at dawn by masked gunmen, neighbors and police said.

And in Baghdad, two bombs went off outside the Iranian Embassy on Tuesday for the second consecutive day. Six civilians were injured, police said. Tension has risen over allegations by the U.S. and some Sunni politicians in Iraq about alleged Iranian interference in the country.

British forces transferred another military base to Iraqi troops in Basra in the country's south, ahead of the planned withdrawal this summer of about half of Britain's contribution to the U.S.-led coalition here. Two other British bases al-Saie and Shatt al-Arab were turned over to Iraqi forces in Basra, Iraq's second-largest city, in the past month.

The bulk of Britain's about 7,500 soldiers in the city will now operate from a base at Basra's main airport.

In other violence Tuesday, two mortar rounds hit a market in southern Baghdad, killing ten people and wounding 16 others, including women and children, police said.