David Halberstam, the journalist whose acclaimed books included a towering study of the Vietnam War and a poignant portrait of aging baseball stars, died. 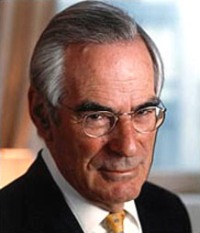 The 73-year-old writer was killed in a car crash Monday while working on a book about the legendary 1958 National Football League championship game between the Baltimore Colts and the New York Giants. He was on the way to interview Giants player Y.A. Tittle on what was dubbed "the greatest game ever played."

Halberstam was riding in a car that was broadsided by another vehicle in Menlo Park, California about 25 miles (40 kilometers) south of San Francisco, authorities said. He was pronounced dead at the scene, and the cause appeared to be internal injuries, according to San Mateo County Coroner Robert Foucrault.

"The world has lost one of our greatest journalists," said Arthur Sulzberger Jr., publisher of The New York Times, where Halberstam won a Pulitzer Prize in 1964 for his Vietnam coverage.

Halberstam's 1972 best-seller, "The Best and the Brightest" a critical account of U.S. involvement in Southeast Asia and especially Defense Secretary Robert McNamara, established him as one of the most committed journalists of his generation.

"He was the institutional memory of the Vietnam War. I think he understood it better than any other journalist," said former CNN correspondent Peter Arnett, who won a Pulitzer for Vietnam coverage in 1966 while with The Associated Press.

By contrast, Halberstam's 2003 book "The Teammates: A Portrait of a Friendship" told the story of Boston Red Sox baseball great Ted Williams and his decades-long relationship with teammates Bobby Doerr, Johnny Pesky and Dom DiMaggio.

Pesky, 87, remembered Halberstam as "spellbinding. He was just an outstanding man."

Halberstam's other books included "The Powers That Be," a 1979 undressing of the titans of the U.S. news media; "The Fifties," his 1993 chronicle of that decade's upheavals; "Summer of '49," his account of that year's Yankees-Red Sox baseball rivalry; "The Reckoning," about the U.S. auto industry; and "The Children," a 1999 narrative about the U.S. civil rights movement.

His 2002 best-seller, "War in a Time of Peace" _ an examination of how the lessons of Vietnam have influenced American foreign policy in the post-Cold War era _ was a runner-up for the Pulitzer Prize in nonfiction.

His book "The Coldest Winter," an account of a key early battle of the Korean War, is scheduled to be published in the fall.

At the time of Monday morning's accident, Halberstam was being driven to an interview with Tittle, the Hall of Fame quarterback football player whose Giants lost the 1958 championship game to the Colts, 23-17.

The drivers of the two cars were injured, but not seriously. Halberstam was being driven by a graduate journalism student from the University of California at Berkeley, where he had visited over the weekend. The crash remained under investigation, and the Menlo Park police officer on duty early Tuesday said no further information was available.

Kevin Jones, 26, who was driving Halberstam, was devastated by the accident.

"It's like the ultimate failure, I had one easy thing to do _ drive this man to his interview and I couldn't even do that," he told the San Jose Mercury News. "I'm still crying. I feel like my life's crumbling around me."

As word of Halberstam's death spread, tributes and remembrances poured in for the veteran reporter whose deep baritone matched the heft of his nonfiction narratives.

"The thing about David Halberstam was that he stayed the course and he kept the faith in the belief in the people's right to know," said George Esper, who spent 10 years in Vietnam with The Associated Press.

Neil Sheehan, former Saigon bureau chief for United Press International, said he had lost his best friend, a man of enormous physical and mental energy who had "profound moral and physical courage."

"We were in Vietnam at a time when we were being denounced by those on high," said Sheehan, who went on to write "A Bright Shining Lie," a Pulitzer-winning account of the Vietnam War. "There was tremendous pressure. David never buckled under it at all."

Author Gay Talese, who was at the Halberstams' home Monday night, said he had known Halberstam since the early 1960s, was best man at his wedding and shared Thanksgiving dinner in Paris last year.

"He was a dear friend," Talese said.

Halberstam's wife, Jean Halberstam, said Monday that she would remember him most for his "unending, bottomless generosity to young journalists."

"For someone who obviously was so competitive with himself, the generosity with other writers was incredible," she said by phone from their New York home. He also is survived by a daughter, Julia.

A brother, Washington cardiologist Dr. Michael Halberstam, was murdered in 1980 when he surprised a burglar upon returning to his Washington, D.C. home. His killer, Bernard Welch, was sentenced to life in prison.

Born April 10, 1934, in New York City, to a surgeon father and teacher mother, Halberstam attended Harvard University, where he was managing editor of the Harvard Crimson newspaper.

After graduating in 1955, he started his career at the Daily Times Leader in West Point, Mississippi. He spent only a year there because the editor at the time thought Halberstam was too liberal, said Bill Minor, former Jackson bureau chief for The Times-Picayune of New Orleans.

He went on to The Tennessean, in Nashville, where he covered the civil rights struggle, and then The New York Times, which sent him to Vietnam. Halberstam quit daily journalism in 1967 and turned to books.

"He was a mentor, a companion and a very dear friend," said Horst Faas, a retired AP photographer who met Halberstam in the Congo in 1960 and later shared a house with him in Saigon. "As a journalist he was very different from the rest of us. Not everybody went along with him, but he believed it was his duty to change things."

Halberstam told journalists during a conference last year in Tennessee that government criticism of news reporters in Iraq reminded him of the way he was treated while covering the war in Vietnam.

"The crueler the war gets, the crueler the attacks get on anybody who doesn't salute or play the game," he said. "And then one day, the people who are doing the attacking look around and they've used up their credibility."