An upsurge of gas in a Chinese coal mine has killed 11 miners, a state news agency reported Tuesday, as the governor of a major province was quoted as calling for heavier fines for mine accidents to improve safety. 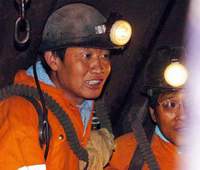 The "gas outburst" occurred Friday in the Tao'er Coal Mine in Handan, an industrial city in Hebei province, which surrounds Beijing, the Xinhua News Agency reported.

A total of 560 miners were in the mine at the time of the accident, and 549 escaped, the report said, citing Cheng Xianguo, the mine's deputy manager.

In another mine in Handan, eight miners were missing and feared dead following an explosion Tuesday, Xinhua said.

China's coal mines are the world's deadliest, with 4,750 miners reported killed last year in fires, floods and other disasters - an average of 13 a day.

Many deaths are blamed on mine managers who ignore safety rules and fail to install required equipment such as ventilating gear to clear gas that seeps from the coalbed.

The governor of Henan province, a major coal-mining area with a population of 100 million people, was quoted by Xinhua as calling for bigger fines for coal mine accidents in an attempt to improve safety.

Some 89 people have been killed in 11 mining accidents in Henan so far this year, 2 1/2 times the number in the same period last year, Gov. Li Chengyu was quoted as saying.

He called the string of deaths "very harrowing."

"It shows the mine owners have no respect for the law and miners' lives," Li was quoted as saying.

Officials and mine managers who are to blame for accidents should face higher fines, Li said.

In one accident in Henan, 33 miners have been missing and presumed dead since an explosion on April 16 ripped through a mine in the province's Baofeng county.

The mine had been shut down but resumed operations without government consent. The owner and five managers fled after the accident but were later detained.