Rescuers found the bodies of three people who were swept out to sea by violent waves caused by a strong earthquake along a fjord in southern Chile. 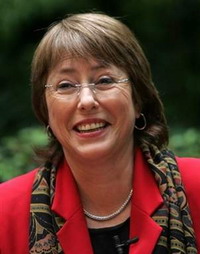 While there was no tsunami, Saturday's 6.2-magnitude earthquake apparently set loose avalanches that crashed into the narrow inlet, creating 8-meter (26-foot) waves.

The government's Emergency Bureau identified the three bodies as Ernesto Contreras, 65; his wife, Elsa Poblete, 54; and their grandson Genaro Linay. They were found in Aysen Fjord, near the epicenter of the quake.

Meanwhile, President Michele Bachelet arrived Sunday and was met by protests from angry residents who say the government has been slow to offer assistance following several months of seismic activity in the region.

Bachelet was considering the release of emergency funding to the area, about 2,050 kilometers (1,700 miles) south of the Chilean capital of Santiago.

Juan Cayupi, a volcanologist investigating the seismic event for the government, said the quake "triggered several landslides from neighboring hills into the sea, causing the level of water to rise steeply, violently, in the form of huge waves."

Cayupi, who was at the fjord at the time of the quake, told The Associated Press by phone that the waters were calm on Sunday.

TV footage taken Saturday showed roaring, white-capped waves. A correspondent for television network Chilevision, Orlando Adriazola, reported seeing a man and his young daughter dragged into the water by a large wave. He said he was at the beach to install an antenna for his station.

"There were some boats in the area and waves destroyed them," he said. "The boat we arrived in was thrown on top of a tree, partly destroyed."

Saturday's early afternoon quake sent people into the streets in a panic at Puerto Aysen and Puerto Chacabuco, the closest cities to the fjord, with a combined population of 35,000.

Puerto Aysen Mayor Oscar Catalan also was at the beach and saw six people being pulled away by the current, according to the Chilean newspaper El Mercurio.

The quake was the strongest and longest of hundreds of quakes that have been felt in the area since Jan. 22.

Meanwhile on Sunday, a moderate earthquake shook Santiago in central Chile, with no immediate reports of damages or injuries. The 5.2-magnitude quake hit at 6:22 a.m. (1022 GMT) and was centered about 130 kilometers (80 miles) northwest of Santiago.