Gunmen kill 23 members of the Yazidi religious minority in Iraq

Gunmen killed 23 members of the Yazidi religious minority in northern Iraq, after stopping their bus and separating out followers of other faiths. 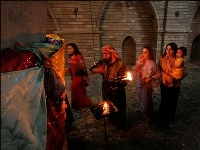 Gunmen kill 23 members of the Yazidi religious minority in Iraq

Armed men in several cars stopped the bus around 2 p.m, as it was carrying workers from the Mosul Textile Factory to their hometown of Bashika, which has a mixed Christian and Yazidi population. The gunmen checked passengers' identification cars, then asked all Christians to get off the bus, said police Brig. Mohammed al-Wagga.

They hijacked the bus with all the Yazidis still inside, and drove them to eastern Mosul, where they were lined up along a wall and shot to death execution-style, al-Wagga said.

Yazidis are a small group concentrated mostly around the northern city of Mosul, 360 kilometers (225 miles) northwest of Baghdad. They are primarily Kurdish, and worship an angel figure that some Muslims and Christians consider the devil.

After the killings, hundreds of Yazidis took to the streets of Bashika. Shops were shuttered and many Muslim residents closed themselves in their homes, fearing reprisal attacks. Police set up additional checkpoints across the city.