A prison parolee admitted setting an Illinois house fire that killed five children and said he was "sorry" about it, according to a police report. 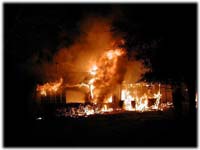 Zachary Meeks, 27, said he did not believe the children were home when he set the blaze early Sunday in Quincy, Illinois, using gasoline he had bought at a nearby convenience store, according to an investigator's statement obtained Thursday by The Associated Press.

Quincy police Detective Adam Yates wrote in the report that Meeks confessed to setting the blaze as part of a feud with members of the family over his plans to testify against one of them.

Meeks admitted pouring gasoline from a plastic milk jug and another container onto the front and back porches and igniting it with a lighter, Yates wrote.

When questioned by police Meeks said "he was sorry" and did not mean to kill the children, Yates wrote.

Meeks was ordered held without bond Thursday on 15 counts of first-degree murder, three for each of the dead children, and two arson counts.

Meeks' public defender, Edward Downey, has not returned telephone messages from The Associated Press, and did not return another call on Thursday.

Services for the children - ages 10, 9, 5, 3, and 5 months - will be Tuesday at a Quincy intermediate school, with burial two days later near Chicago.