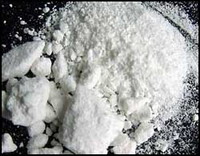 A truck loaded with cocaine took a curve too fast and flipped over in Colombia, spilling nearly a ton of the drug across the highway.

Police said the drugs were hidden in the truck's walls and roof, which ripped open when the vehicle overturned in Medellin, 250 kilometers (155 miles) north of the capital of Bogota.

The driver escaped injury but was quickly arrested.

Police said the cocaine was destined for the northern port of Uraba, a major exit point for Colombia's massive drug smuggling industry.