Belgium opened a trial to find out why 10 of its paratroopers on U.N. duty were killed in Kigali at the start of the Rwandan genocide 13 years ago. 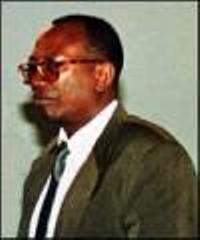 Former Rwandan Maj. Bernard Ntuyahaga sat alone in the dock, accused of manslaughter in the case of the Belgian soldiers and the Rwandan premier they were to protect. He is also accused of spreading rumors that the Belgians were responsible for shooting down the plane and killing President Juvenal Habyarimana the evening before.

The events set off Rwanda's genocide, a 100-day killing spree during which radical Hutus slaughtered some 500,000 people, mostly ethnic Tutsis.

In Belgium on Thursday, attention centered on the 10 soldiers who perished.

"It hurts very much to be here because it makes me relive the nightmare which I experienced," said Pierre Leroy, brother of one of the slain peacekeepers, Yanick Leroy,

"The reason why I am here today is especially to see Mr. Ntuyahaga," he said.

The first session at the ornate Justice Palace centered on the selection of jurors and the reading of the charges. The trial is set to last at least two months. Judge Karin Gerard will hear over 150 witnesses and survey some 70,000 pages of evidence.

The trial may reveal about the few fateful days around April 7, 1994. The death of the 10 peacekeepers led to the withdrawal of the 450 Belgian troops in Rwanda and eventually, troops from other nations in the U.N. mission too. It opened the way for the genocide.

The April 6 plane crash that killed Habyarimana is still unexplained. The Belgian troopers were given orders the next day to take Prime Minister Agathe Uwilingiyimana to the radio station to make an appeal for calm. When they arrived there, soldiers of the Hutu army opened fire with rifles and grenades. After about two hours, the prime minister fled. She was caught and murdered.

Accusations are that Ntuyahaga ordered the Belgians to give up their weapons or be killed. They were taken to a Rwandan military base. Soldiers, believing rumors the Belgians were responsible for shooting down the president's plane, then started killing the 10 paratroopers.

Ntuyahaga handed himself over to Belgian diplomats in the Tanzanian capital Dar es Salaam in 2004 after a court there released him from custody and rejected an extradition request from Rwanda.

Ntuyahaga was arrested by Tanzanian police in March 1999, just after he was released on a legal technicality by the International Criminal Tribunal for Rwanda, which is based in the northern Tanzanian town of Arusha.