Angry crowds in several Indian cities burned effigies of Richard Gere after sweeping a popular Bollywood actress into his arms and kissing her several times during an AIDS-awareness event. 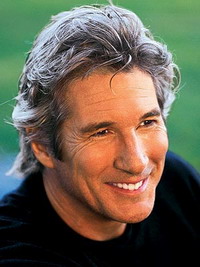 Photographs of Gere embracing Shilpa Shetty and kissing her on the cheek at an HIV/AIDS awareness event in New Delhi were splashed across Monday's front pages in India - a country where sex and public displays of affection are largely taboo.

In Mumbai, members of the right-wing Hindu nationalist group Shiv Sena beat burning effigies of Gere with sticks and set fire to glamorous shots of Shetty.

Similar protests broke out in other cities, including Varanasi, Hinduism's holiest city, and in the northern town of Meerut, where crowds chanted "Down with Shilpa Shetty!"

The two appeared at a press conference in New Delhi on Sunday to highlight the HIV/AIDS epidemic among India's truck drivers. In front of a cheering crowd, Gere kissed the giggling Shetty on the hand, then kissed her on both cheeks before bending her in a full embrace to kiss her cheek again.

"This is a bit too much," Shetty said after the embrace.

On Monday, Shetty tried to stamp out the controversy.

"I understand this is his culture, not ours. But this was not such a big thing or so obscene for people to overreact in such manner," she told the Press Trust of India news agency.

"I understand people's sentiments, but I don't want a foreigner to take bad memories from here," PTI quoted her as saying.

"Such a public display is not part of Indian tradition," said Prakash Javadekar, according to PTI.

Shetty, already well-known in India, became an international star after her appearance on the British reality show "Celebrity Big Brother" - another controversial public appearance. A fellow contestant, Jade Goody, sparked international headlines by making allegedly racist comment to Shetty. Mobs took to the streets of India to denounce Goody, and Shetty went on to win the competition.