Airlines canceled more than 350 flights as a hard-blowing nor'easter gathered strength along the East Coast. 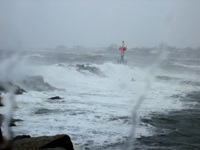 The cancellations at the New York area's three major airports affected most carriers, said Steve Coleman, a spokesman for the Port Authority of New York and New Jersey. More cancellations were expected throughout the day.

Forecasters expected sustained wind of 40 mph (64 kph) and a storm surge of 3 to 5 feet (1 to 1 1/2 meters), a combination that could cause as much coastal damage as a winter storm that wreaked havoc on the island in late 1992, Gov. Eliot Spitzer said.

Heavy rain and thunderstorms extended from Florida up the coast to southern New England on Sunday morning and the National Weather Service said Washington's Reagan National Airport had measured 1.43 inches of rain.

Spitzer said some low-lying areas of Long Island may need to be evacuated, and he deployed 3,200 members of the National Guard to potential flood areas.

The weather system was forecast to strengthen along the East Coast and form a nor'easter, a storm that follows the coast northward with northeasterly wind driving waves and heavy rain.

The National Weather Service posted storm warnings and watches all along the East Coast, with tornado warnings in South Carolina and flood warnings extending from Virginia north to the New York area. Winter storm warnings were in effect for parts of New England.

The weather service said as much as 20 inches (50 centimeters) of snow was possible at higher elevations of New York's Adirondacks by the time the storm passes late Monday and Tuesday.

Organizers canceled the Greek-American Independence Day parade that had been planned on Fifth Avenue.

"It is unusual for this time of year. We probably see a storm like this, at this time of year, probably once every 25 years or so," said Brian Korty, a meteorologist with the National Weather Service in Camp Springs, Maryland.

A funnel cloud was reported over Florida's Pasco County, but there were no immediate reports of a tornado touchdown, said Russell Henes, a weather service meteorologist in Ruskin.

The storm had been blamed for five deaths as it blew out of the Plains late in the week, two in violent thunderstorms in Texas and three on slippery roads in Kansas, where more than a foot of snow fell. Two tornadoes caused damage Friday in Texas.