A former supervisor of trash company convicted of murdering six women 20 years ago was to be sentenced. 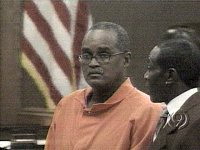 The sentencing hearing for Lorenzo GIlyard, 56, is largely a formality as the only possible sentence is life without parole. Prosecutors had agreed to not seek the death penalty

Relatives and friends of six strangled women waited for two decades without answers before advances in DNA evidence eventually led police to the women's killer.

Gilyard was convicted last month of six counts of first-degree murder and acquitted of a seventh. He was linked to the killings in 2004 as police crime lab workers tested evidence from old unsolved cases.

He had been charged with 13 killings, but six of those charges were dismissed as the trial got under way. Prosecutors pursued charges in what they considered the seven strongest cases.

Much of the testimony during the trial dealt with DNA evidence. Prosecutors said Gilyard's semen was found on six of the women.

The defense contended the evidence merely proved Gilyard had sex with the women - but not that he killed them.