Japanese police have arrested a woman and her daughter who had tried to smuggle about 80,000 Ecstasy tablets into Japan on a flight from Europe. 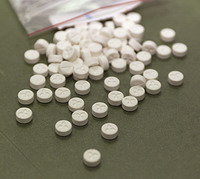 The pills have an estimated street value of 320 million yen (US$2.69 million; 2 million EUR), and it was the largest Ecstasy haul ever seized at a Japanese port or airport, Kyodo News agency said, citing Chiba prefectural (state) police.

Police arrested the unidentified woman, 61, and her daughter, 25, on March 12 at Tokyo's international airport in Narita, Kyodo said. The tablets were hidden in two double-bottomed suitcases that the pair carried on a flight from the Netherlands via Frankfurt, it said.

They were indicted on March 30 on the charge of violating drug control laws, Kyodo said citing police.

The two told investigators that a Japanese man had asked them to bring in the pills, identified by police as MDMA, Kyodo said.

Police later arrested the man, a member of an organized crime group in central Japan, the report said.

Ecstasy trade in Japan is heavily controlled by the "yakuza," or organized crime syndicates.

Drug seizures in Japan have hit record highs in recent years amid rising illegal drug use and heightened crackdowns.

Under Japanese law, those convicted of smuggling or manufacturing narcotics face up to life in prison.