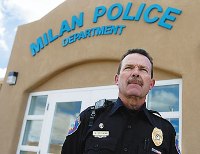 Police in riot gear clashed with dozens of Chinese immigrants who massed in a Milan neighborhood to protest a car fine given to a Chinese woman.

About a dozen police officers were injured and several nearby cars were damaged, the ANSA news agency reported.

Holding banners and Chinese flags, the protesters staged an unscheduled demonstration in the city's Chinatown, and at one point threw bottles toward police, video footage showed.

The disturbance began after police gave a Chinese woman a EUR40 (US$53) fine for double-parking while unloading her car and tried to check her residency papers, ANSA said.

There are about 13,000 Chinese immigrants registered in Milan, according to the latest available figures from 2005.